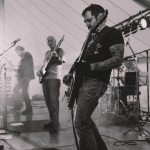 many thanks for the feedback- glad you enjoyed the gig... 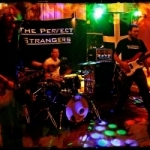 Even More Perfect The Perfect Strangers on Saturday 5 March 2011

I last reviewed The Perfect Strangers in August, when I first saw them, shortly after the band had newly formed. Since then my wife and have become firm fans, having seen them on a number of occasions at various venues and it was good to see the Nags Head gaving them a great welcome on Saturday.

The band have expanded their set with a few great additions to the list and their version of Led Zep's 'Kashmir' is a corker and well worth hearing.

It is a testament to the band's musicianship that they sound tighter at every gig. It took only a very brief soundcheck to get the balance completely perfect.

New drummer Dave (a long term stand in for Ben, who is taking a break) has settled in well after a few months and is technically very capable, performing some great fills and quite an exciting impromptu solo right at the end of the gig. I would love to hear him and bassman, Simon, flexing their musical muscles on something that would give them both some scope to show off - perhaps 'Radar Love' might be fun?

Bass players are often considered the quiet men of the band, staying in the background and in the shadow of the lead guitarist, but Simon is no introvert and delivered some quite intricate bass work throughout. I particularly enjoyed the lovely bass chords employed during 'Fire and Water'.

As ever, Adam's lead guitar work was outstanding and he delivered some truly superb solos. The Nags Head is his local and it seemed the local crowd inspired him to really pull out the stops. Recognising that they had the crowd well and truly behind them, they didn't stop for a break, but kept going for a solid two and a half hours, with several encores for the enthusiastic crowd!

Well known crowd-pleasers by bands such as AC/DC, Fleetwood Mac, Hendrix, Queen and Led Zeppelin were mixed with quite a few lesser known songs - a brave move, but one the band are quite capable of pulling off. Doyle Bramhall II is hardly a household name and his song 'Green Light Girl' was not a massive hit compared to the other songs in the set (and certainly not a typical pub jukebox standard) yet the band regularly use it as their opening number. Similarly, ask most people to name a Lynyrd Skynyrd song and there are probably a couple of other songs that will spring to mind before 'Simple Man', yet the band approach and perform these classics with as much fire, emotion and passion as all the rest.

In summary, unlike some of the many classic rock and blues bands that are doing the pub circuit in this area, this band are worth seeing time and time again because they just keep getting better and better.

Thanks for such a brilliant (and detailed) review!! We had a great time at The Nags last Saturday, thankyou so much for all your support. Look forward to seeing you at another gig soon!

This was one of the band's early gigs, as they are relatively new, as a band, but clearly not new to the music scene, as the sound was considerably tighter than expected from a band with only a handful of gigs under its belt so far.

Described as "classic rock and blues", the band certainly lived up to its description, but with the emphasis firmly on rock - belting out rock anthems from the likes of Purple (Smoke on the Water), Zeppelin (Rock and Roll), Guns & Roses (Sweet Child of Mine) and Hendrix (Hey Joe, Foxy Lady) as well as some lesser known rock songs that deserve to be classics, mixed in with a couple of blues rock tunes by Joe Bonamassa (Bridge to Better Days) and others.

Front man Adam Sweet also gigs in the area as a solo acoustic act but, even though a couple of songs are shared between his solo set list and that of the band, they sound dramatically different. He is a competent and very fluid lead guitarist, with a voice that has a distinctively bluesy edge without descending to a growl or rasp. Bass player Simon, in addition to some intricate bass lines (sometimes more intricate than the original song) offered some higher pitched backing vocals and one wonders if he might be better suited on lead vocal on higher register songs by, for example, Queen or Led Zeppelin, where Adam's lower octave vocal was less effective. However, as only a few words were heard from Simon's mike, that is yet to be judged. This is not to put down Adam's singing, but perhaps a couple of songs were not suited to his voice.

The equipment was top notch - Adam used a Fender Stratocaster and Gibson Les Paul, Simon a five string Squier bass and Ben a Yamaha electronic drumkit, although I was not sure whether this was his main kit or just used because of the limited space in the venue. It sounded extremely powerful, with the bass drum in particular sounding stunning for electronic kit. Amplification was Marshall, through Yamaha speakers and a Studiomaster desk. Overall the sound was very well rounded and balanced.

There was not much interaction with the audience between songs, although attempts were made to do so, and it got better towards the end. This is something the band are bound to improve as they get more experience together. Frequent changes of guitar were not too distracting, as they were fairly quick and each guitar was used appropriately to get the right sound for each song.

Overall, the band put on a great, entertaining show and the audience were shouting for more than one encore which, on a Wednesday night, is a good achievement. I will certainly go see them again.

Thanks alot "A Music Fan" for your fab review. Had a great night, and was good to see so many people out on a Wednesday! Like you mentioned we've still only done a handful of gigs and the set list is still undergoing a couple of tweaks here and there, but thanks for being part of such an enjoyable night!

Write a gig review for The Nags Head »

Is this your venue? Click yellow triangle for important details.
Warning: this venue page has not been claimed by the venue.Gigs listed for this venue on Lemonrock have not been checked for correctness by any representative of this venue. You are therefore advised to make sure about dates, times, and entry fees published. Lemonrock assumes no responsibility for incorrect information on any page. Any gigs listed for this venue that cannot be edited by the relevant band/artist will show a 'NOTE' warning.Nobody has added any details about this venue. Any Lemonrock band/artist member can edit contact details on this page if the band/artist is playing at this venue. This page can also be claimed by this venue. Last updated 26 November 2020.
We use cookies to make your browsing experience better.
We use cookies to make your browsing experience better.