"Noasis is the definitive tribute band to Manchester's super group Oasis. Since their formation in 2006

and with over 1100 performances to date Noasis has justly earned its reputation. With obsessive attention to detail the band recreates the real Oasis experience playing all the classic songs as if they were their own.

"A Supersonic Show Of The Very Best Oasis Anthems"

There will be a support act on the night TBA 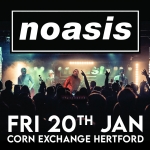 Previous gigs (2) »
Export gigs as an iCalendar (.ics) file for Apple, Google or Yahoo Calendars.Note: some iCalendar implementations incorrectly cache your calendar. To prevent old calendars showing on other sites or apps, replace the URL in your diary site or app with the URL shown - this URL changes when your calendar content changes, so your feed will always be up to date if you always manually replace the URL.
Export gigs as a CSV file for OpenOffice Calc, Microsoft Excel or other spreadsheet.
We use cookies to make life easier.
Info »
We use cookies to make life easier.
Info »