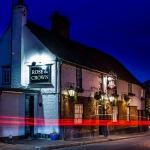 There are hundreds of would-be Sinatras and Bowies roaming the UK and earning a very good living but tribute acts playing the music of Tom Petty and the Heartbreakers are a little thin on the ground.

Even rarer is a group of musicians who are perfectionists and go to great lengths to recreate the impressive, tuneful rock music created by the singer-songwriter-musician from Gainesville in Florida.

Petty died one year ago at the relatively young age of 66 but his music will live on for future generations.

The perfectionists, the four-piece Petty Criminals, are doing their small bit to bring Tom’s music to a wider audience.

And it was no wonder music-lovers packed out the lovely St Albans village pub the Rose and Crown to see this outstanding quartet.

Nigel Minchin works extremely hard in the Tom Petty role and he takes on the vocal duties, plays a variety of guitars and even adds some harmonica. Nigel doesn’t wear a Tom Petty wig and attempt to copy the master but there’s a nice American twang to his vocals and he has a strong voice.

In Andrew Zsigmond the Petty Criminals have a remarkable lead guitarist. He re-creates brilliantly the work of Petty’s long-standing guitarist Mike Campbell. Andrew has toured as opener for the likes of Fleetwood Mac, Don Henley, and Tina Turner and his vast experience shines through.

Bass player Marcin Bochinski obviously loves Tom Petty’s music and he played with great enthusiasm throughout the evening. The band’s line-up is completed by Pete Wright who keeps the band in line with his tight drumming.

So hits like Listen To Your Heart, I Won’t Back Down and Don’t Come Around Here No More are mixed in with Honey Bee and You Wreck Me from Tom’s Wildflowers album.

The Rose and Crown audience loved this band who played two memorable sets finishing the second with three Petty classics – Running Down A Dream, Free Fallin’ and American Girl, the latter an excellent choice as it was the last song Tom ever performed.

Incidentally, I wonder how many in the audience were aware that this was the Petty Criminals’ first full-length gig and that the group had only been together for just over two months.