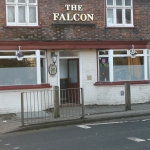 Party Principle at The Falcon on Fri 19th Feb at 9pm.

The London-based band play a wide range of pop, funk, soul and disco covers and are guaranteed to get you dancing!

From Blondie and Prince to Bruno Mars and Dua Lipa - expect a great evening of new and old hits alike.

Get ready for the party!