Great to see so many people out-out The Crown Hotel, Chertsey on Friday 15 October 2021

Decided to go 'On tour' myself - 1st time @ The Crown. Red Rocket were brilliant as usual & good to see soo many people enjoying themselves. To paraphrase Thin Lizzy 'Don't Believe a word' - come see 'em yourselves. Can't wait til they are at O'Neill's Woking at the end of the month

Thanks dave for your review.

Come and say hello at Woking!! 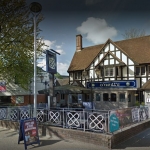 RedRocket played Friday night, and it's nice to see a band with a female lead. A great voice with a lot of power and range, and great presence. The 3 guys on the instruments were great too. Very much enjoyed the drummer at the end of Teenage Dirtbag. Hope I get to see you guys again.

Thanks for your great review. Always good to get feedback.

Come and say hi next time you see us and join us on our Facebook page to get updates on all our upcoming gigs.

Loved their version of 'Alice' - last night was more of the floor filling stuff, as they have a wide setlist

Have to try to see them play a longer set, as O'Neills have reduced band times over the past year, to hear more

Thanks Dave for the great review. We always love getting feedback .

We do try and change our sets around from gig to gig and appreciate that our crowds like a mix of genres of songs and tend to try and tailor to suit the crowd. We did have a large crowd in last night that had asked for a party set, but will try for more rockier set for you next time.

Thank you to Redrocket for making my party one to remember!

Great choice of songs for various tastes and very professional.

Thoroughly recommend seeing them or booking them for a function.

Amazing. Thank you so much.

Thanks for the review Claire.

Glad we could make your party a memorable one.

Look forward to seeing you at a gig sometime in the future. 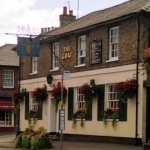 The Goat, Berkhamsted on Saturday 15 December 2012

Initially sceptical because of the MP3's on here that I would enjoy a hard rock band (by my usual taste in music). Got to the redecorated Goat and saw their playlist on the stage so asked if I could have a look. Surprise - lots of tracks that appealed to me. Admittedly the second set was more hard core. The band make an incredibly tight sound with the drummer being particularly effective (massively unfair on the others as they were very good also). Vocals on the first two tracks were like a car engine on a cold day then it warmed up and what an amazing voice the lead singer has. The female bassist did a couple of tracks which was a pleasant distraction but the main event was the band in full force with the male lead singer. Ducked out after three tracks of the second set as it did not suit my tastes but that takes nothing away from the quality of this band.

Sorry that the rockier songs were not to your taste, but to be fair, not hard core rock when compared to some other rock cover bands around.

We will be back on February 23rd. Hope to see you again then.

Appreciate the comments on the drummer