We had Replica Rockaholics as our evening entertainment at our wedding and they were incredible. They were so easy to liaise with regarding what music to have on our set-list and Tom even suggested a good order to put the songs into and ones that would and wouldn't work. All of our guests had such a good time and so many have commented on how good the music was and that it was some of the best wedding music they have enjoyed. The dance-floor was full the entire evening because of the amazing music. Thank you so much for playing at our wedding!

Dear Claire & Elliot, thank you so much for this incredible review. The band really enjoyed playing for you that evening and it was just fantastic to see everyone on their feet having such a good time! We wish you much happiness!

A Dynamic Professional Performance! The Horns, Watford on Saturday 23 March 2019

I'm an avid Lemon Rocker, this is where I find the bands I go to see every week! This week I traveled to The Horns, Watford for the first time. It took the wife and I, 1 hour to get there. The pub was good and the people friendly.

Saw Replica Rockaholics in January at the Crown Hotel, Chertsey. I couldn't wait until April when they are next at Chertsey.

This review is more about the band as well as their music. The wife agreed the band was every bit as good as I intimated. she remarked that Tom the singer had a very versatile voice.

The Band! Lead Guitar - Mark, he makes the guitar sing. he produced a beautiful sound playing Guns N' Roses - Sweet Child Of Mine.

Bass Guitar - Rhys, Mr. Bass Fingers - the way he strums the guitar, it resonates around the pub ( quality ).

Drums - Rich, a tight display with incredible dexterity, pace and speed ( he roasted that drum kit).

Lead Vocals - Tom, No matter what the song, he manages to find the depth, range and key to sound like the original. He is able

to capture the essence of Bryan Adams voice, with Summer of 69 - it is not easy!

Some bands spoil there performance with too much banter between songs, losing the momentum. This band belts out number after number with a seamless transition. They also change their set list, very important!

They played 7 songs I have never heard them play before. Bruno Mars - Locked Out of Heaven,The Commitments - Mustang Sally, Elton John - Saturday Nights Alright for Fighting, George Micheal - Faith, Huey Lewis and the News - The Power of Love, Kenny Loggins - Footloose and Scouting For Girls She's So Lovely.( All with great aplomb).

We also heard, Jet - Are you Gonna be my Girl, The Killers - Mr Brightside, Lynyrd Skynyrd - Sweet Home Alabama, The Sufaris - Wipe Out and The Fratellis - Chelsea Dagger. Plus many other songs, the band played their hearts out until 00.30.

What a tight sound they produce, they gel so well together.

The dance floor was heaving and you could cut the atmosphere with a knife. We all wanted them to carry on playing after the encore of Joan Jett's - I Love Rock and Roll. See you at Chertsey in April. Ron ( Geordie).

Wow! Great review. Thanks, Ron. Always a pleasure to see you at one of our gigs. See you at the Crown! 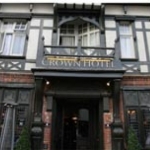 There are some bands who never let you down. What a memorable night at the Crown Hotel with Replica Rockaholics. All night they played an eclectic mix of rock and pop classics. They warmed us up with Lynyrd Skynyrd - Sweet Home Alabama, Elvis - Jailhouse Rock, Wild Cherry - Play that funky music ( white boy ), The Sufaris - Wipe out , The Fratellis - Chelsea Dagger ( superb drumming ). The dance floor was packed and they hit the detonator in the second set, sending everybody into a frenzy. Taking of with Wheatus - Teenage Dirtbag ( loved your voice Tom ), Blink 182 - All the small things. Then they went into overdrive with White Stripes - Seven Nation Army (tremendous bass playing ). The Lead Guitarist reminds me of Brian May. The whole place was baying for more and they finished up with my request as an encore ( Joan Jett's - I Love Rock & Roll. Thanks to all those lovely woman who danced with me. A big thank you to Tony the manager and his superb bar staff. I'm a regular at The Crown Hotel and they make us so welcome. Keep up the good work at Lemon Rock ,I have made so many friends and found a lot of great bands and pubs, through your website. Ron (Geordie)

What can we say? Thanks for this great review! We always have a ball down at the Crown! Many thanks for being a regular fan of the band and we look forward to seeing you again.

I have seen Replica Rockaholics a few times in the last 18 months. This was their best performance ever, even with a stand in bass guitarist.

Why? Rated them a good band, however they have improved so much of late - that they are now very accomplished. It shows they have been putting time in at the studio. Proof of plenty. If you have a heaving packed dance floor of people, then you must be giving the audience the stimulation they desire.

They entertained us with :- Aerosmith, Billy Idol, Bonjovi, Bryan Adams, Elvis, Jet, Joan Jett, kula Shaker, Surfaris, Wheatus and White Stripes plus many others. I really loved Bryan Adams - Summer of '69, Bon Jovi - Its my life and You give love a bad name, Wheatus - Teenage Dirtbag and White Stripes - Seven Nation Army. Tom you are now a very authentic rock singer! Rich, your drumming was superb! Mark you know how much I like your lead guitar playing! Full marks to the stand in bass guitarist! Did some crazy off the wall dancing with some of the women, thanks girls. What a great night! See you soon. Ron (Geordie)

Hi Ron, this is a great review! We're thrilled that you enjoyed yourself so much and that you thought we were even better than the last few times you saw us. We had a great time at the Crown and we love to see the crowd respond so well to our music! We look forward to seeing you soon!

Took a chance, big pay off! The Crown Hotel, Chertsey on Saturday 13 January 2018

I convinced my friends to come watch this band, none of us had heard of them but we all were so glad we took the chance. Fantastic range of music, played extremely well and honestly will be keeping an eye out to see if they come back. Well done to all the lads, Gary who's not normally on guitar apparently was very good too. Only small criticism would be the lead singer was difficult to hear occasionally but overall really enjoyed myself.

Thank you so much for taking the time to leave this great review. And thank you for the feedback!

Gary was indeed depping for our guitarist who hurt his back, and he did a sterling job.

We always have a great time when we play the Crown Hotel and last Saturday night was no exception.

We hope to see you again soon!