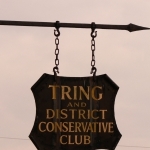 Thanks Rita, once again a lovely audience and a great night! See you again!

Some members had expressed concern about the club putting on a performance of classic rock but they should not of worried. What a great night was had by all, even some of our more staid members were to be seen rocking the night away. Rick entertained from the first to the last minute with great vocals and guitar playing backed by superb backing tracks which had those present clamouring for more. Can't wait for Rick to perform here again. Rita Gill, Tring and District Conservative Club

I really enjoyed playing at the club Rita, such a lovely group of people! Thank you for the great review, and I look forward to playing there again soon.

A great set by the very talented Rick Chase, A mixture of classic rock covers done in great style. It was a shame For Rick that the crowd wasn't bigger and the ones that were there should have got more involved. I highly reccomend people should take any chance they get to see Rick Chase play

Many thanks Alan. It's tough playing in God's waiting room! ;)

As always a fantastic night. Rick never fails to entertain. He started the set off with Jailbreak which got everyone in the mood to rock, this was followed by great tracks like Feel Like Making Love, Gimme All Your Lovin, Addicted to love and for the younger audience Chasing Cars. The second set started with a Queen Duo of Radio Ga Ga and I Want to Break Free, classics Sweet Home Alabama & Summer of 69 were just some of the hits in the second set. The set ended with All The Small Things which had the audience jumping around. Rick interacted with the crowd and tried to ensure that everyone was having a good time, adjusting his set to the age of the audience. While he had a short deserved break he mingled with the punters whilst popular music played in the background. The evening was very hot but the large crowd outside couldn't help coming inside to listen to Rick's set. Thanks for a great evening Rick! Looking forward to the next one.

AWESOME GIG RICK!! Everyone had such a good night at The Lamb, you had everyone up and dancing! I really liked the different mix of music you played, really wicked gig - nice one! Cant wait to book you again!