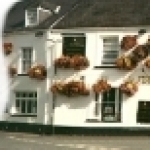 I have never seen this band before, and I am a real fan to say the least of live music.

Well, this band is just brilliant. Very slick, very professional, and an all round crowd pleaser.

I am still buzzing. Fantastic!!

I will definitely go out of my way to see them again and will recommend them to to anyone and everyone.

Thank you guys, you are great.

Thank you so much for your kind words! and we hope to see you soon at another gig! xx

After seeing the Riviera Dogs perform several times, we were overjoyed when we learned that they were available for our wedding. As soon as they led in with our first dance song (which was an incredible rendition of our favorite track), the dance floor filled up. Our most lasting memory of this really special time is seeing the pure joy and laughter of all our guests, dancing the night away. The sound quality was immense, and every 'Dog' is uniquely talented in their own specialism. And let's not forget how utterly lovely each one is and how their personalities lit up the room. We felt honoured and grateful that The Riviera Dogs 'made our day'. They played two sets either side of the evening buffet, so all our attending guests enjoyed the perfectly reproduced sounds of the 80s and 90s. In fact, I would go as far to say that they did each classic better than the original! Of all the feedback given by our family and friends about our 'big' day, the main comment (on both our Facebook pages and our wedding guest book) was 'best band EVER!'. We knew that The Riviera Dogs would make our day extra special, but to be perfectly honest they made our day amazing (only a close second to the actual ceremony...very close).

Thank you so much for your kind words, and lovely to see you at the Cromwell Arms gig so soon after your wedding! we had a great time and were honoured to be a part of your big day! 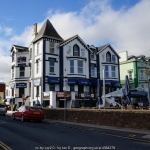 Played my 40th on 7th Feb, fantastic band, superb musicians, everyone who went has commented on how good they were and how they made the night. Fab set list with all my favourites of the 80's and 90's, would thoroughly recommend this band!

Thank you for your kind words Rachel, we had a great time playing for you and your family & friends x 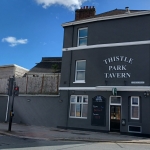 The first time I saw this band was a midweek slot at the Spinning Wheel in Paignton for their debut outing over a year ago and I admit it did feel like they were just another cover band - albeit one with exceptionally well-known members in Jimmy Alderson, Simon Westaway and Alex Smith (best known for their association with Joey The Lips) - the lineup completed with Dan Sennet on bass and Steve Sims on keys.

My recollection is that the distorted venue acoustics and poor sound did the band no favours, so it was difficult to ascertain at the time just what potential lay ahead for them, but boy - what a difference a year makes!

Here they are tonight, all polished, suited and booted - unusual maybe for a pub band, where attire is more casual, but certainly what you'd expect from any professional function band, which is exactly what they've become. And, in covering material from the Eighties and Nineties, they've cherry-picked much-loved quality classics, while not falling into the easy trap of choosing the obvious hits.

After initial introductions and niceties, they get the evening underway with "Saturday Night's Alright" and we're off on a trundle down memory lane with "Everybody Wants To Rule The World" (Tears For Fears), "Died In Your Arm"s (Cutting Crew), and particularly enjoyable covers of "Rosanna" and "Hold The Line" (Toto) followed by an all-time favourite of mine, "A Design For Life" (Manics).

Since this is a receptive crowd, clearly enjoying themselves, there's no problem getting the audience warmed up as Jimmy's distinctive, competent, confident vocal performance, backed by some incredibly impressive musicians, delivers a well-chosen, crowd-pleasing repertoire, the pace of which is maintained with the likes of "Take On Me" (A-ha), "Boys Of Summer" (Don Henley) "Footloose" (Kenny Loggins) and "The One And Only" (Chesney Hawkes).

It's always interesting when bands put their own interpretation on covers, but it's also enjoyable to hear them as they were originally intended and, so far as Riviera Dogs is concerned, their delivery is crisp, sleek and polished with accurate representation musically. It's also refreshing to see a band that really knows how to put on a show, masterfully working the audience - all without becoming too cheesy.

I agree with everything Spot said ,awesome band and TOP NIGHT :)