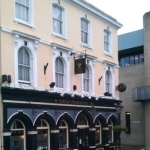 The only way I can describe the vocalist's Ollie's voice is by likening him to Joshua Homme from Queens of the Stone Age, but with yet more power and suited to 90's rock: awesome! - while drummer, Matt, was obviously born to play on stage! Besides having one of the best looking drum kits available, he uses it well in a demonstration of highly skilled drumming, while his throwing & twirling of sticks might fool you into believing he was perhaps a champion baton twirler in previous life!

There is a faint reminiscence of Jack White in the look/style of guitarist, Andy, but this is soon obliterated by the heavier sound of his guitar. Be prepared for Andy's competent and energetic playing to shock on occasions. As for bass player, Stevie - he can really PLAY bass. What more can you add?

Ably taking what you might call 'middle of the road' rock (generally rock/indie) these guys 'rocked up' wherever possible and at times completely changed the style of the song. Their cover of Britney Spears's "Toxic", for example, was brilliant, in which Andy's backing vocals were particularly heavy but laden with fun, "You're toxic, I'm slippin' under" - the sort of stuff that, once you've heard it, is hard to get out of your head. They approached The Automatic's "Monster" with this heavy element to it too, which also proved very effective. For me, however, the song of the evening was the Foo Fighters' "Hero" providing the limelight for Matt to show off his talents on the drums.

The band members were very approachable, and during the songs interacted well with the audience in a very personal way. To my mind they were also very forbearing in the face of a couple of idiots who kept spilling their drinks close to where they were performing with some even spilling onto some of their equipment! Such behaviour ought not to be tolerated, and I can't understand why Kitty's security didn't get wind of it and chuck this pair (who were annoying not only the band but other punters too) out on their ears! All credit goes to Rockafella for maintaining their professionalism in spite of such poor behaviour and to their continuing performance until a late hour finishing on a high to a largely appreciative and considerate audience!

Wow what a glowing review Rick, your words are too kind!

Kitty's never fails to provide us with a great night, we love the place and feed of the audience. I think big Phil the bouncer moved those guys on pretty swiftly - he looks after us!

Hope to catch ya at another gig soon!

Been watching this band now since 1st seeing them on 23rd Dec down Thistle. Can honestly say that these guys are extremely talented musicians and always give a great night. See you at the Brass Monkey on Sat 31st. Cant wait for "Brickfield Nights"

Cheers Steve and Mandi, very kind words indeed. We all really appreciate your continued support and are chuffed that you have been to so many gigs!

watched Rockafella again at the drakes drum lastnite , this band gets better and better ,well done , BOOOK THIS BAND !

Cheers Ian! More kind words like these and we'll play My Sacrifice for you again mate! ;)

looked on lemonrock see what bands where playing lastnite there where at least three good bands playing plymouth area the vibes , the sound , rusty angel , but opted to see rockafella at drakes drum plymstock ,good choice with steav and andy at the helm x crossing they came out with some great tunes to entertain the crowd .even though they are a new band allready one of the best covers band in plymouth .good luck guys cant make the 2nd dec ,but will be at the thistle for the 23rd dec ,should be a cracker.

Cheers guys, great to see you there! We were all dead chuffed that you came along on the strength of our demo alone particularly when as you say there were so many other great bands playing too last night!

Look forward to seeing you at The Thistle!