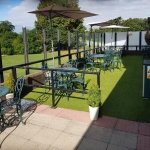 Making their first post-lockdown appearance, it was like they'd never been away. The crowd were dancing from the very first number and didn't stop. We even had the members of the bands who'd played earlier strutting their stuff on the dance floor. They don,t play the usual covers. they play a great mix of late 70's, early 80's and even 90's, noughties music. All of us at Par 3 can recommend Rockit Science, so much on fact we're having them back on the 17th September!

It Is RockitScience [The White Hart, Southgate] on Friday 26 February 2016

It's refreshing to see an experienced rock band who do not focus on playing the predictable and RockitScience, introduced to the White Hart regulars by lead singer Phil Dunk as "a band unknown to millions," obviously like to surprise audiences with their selection of songs, featuring among the opening numbers, "Crash" (made famous, if that's the right word) by the Primitives and The Inmates' great bluesy rocker, "The Walk".

This five-piece band were formed five years ago from two other groups: The Idles and the wonderfully-named Dunk and Disorderly and obviously love their rock music, which shows in their dedication to getting the sound balance just right.

All RocketScience band members are tight and skilful musicians. Andy Jack on bass guitar and Russ Adkins on drums provide the solid rhythm section while the band boast (à la Eagles) twin lead guitarists in Chris Merritt and the splendidly-named Jonny Plectrum, who both ably demonstrated their tremendous technique on numbers like Pink Floyd's "Another Brick In The Wall" and the Steve Miller Band's "Rock 'N Me".

I particularly liked the band's style in often covering two consecutive songs by the same act so that we had the Rolling Stones' "Tumbling Dice" and "Honky Tonk Women" and, as a tribute to Bowie, "Ziggy Stardust" and "Suffragette City".

Other outstanding numbers during their two one-hour sets included Chuck Berry's "Little Queen" (not one that many bands attempt); James's excellent indie song "Sit Down" and REM's haunting, "The One I Love".

As their frontman, Phil throws in some humour (and a few dodgy jokes) but he needs to talk more to the audience and less to other members of the group. That said, RockitScience love their rock, which comes across in their performance, so do search out their forthcoming gigs on Lemonrock. 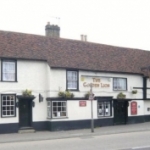 Fantastic night at the Golden Lion last night. Inspiring and tight :-) thank you. Let me know if you want the pictures.

Thanks Joe! Glad you enjoyed it.

Great gig at The Old Bell last night guys. Quite a mixture of good material, well played and sung. Hope to see you again soon.

Glad you enjoyed it Joe, we did, too!