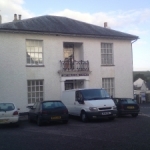 So, rocked up in a little rebel town down Devon way, a place called Colyton, almost equidistant between Axminster and the fortunately named Beer; called in to the Colcombe Castle, right in the guts of the place, not expecting much. I’ve been here before. The band was advertised in the traditional way via a blackboard out front. Simple Chaos. Nine till late. Got there for the second set but sorely wish I’d made it sooner.

They’re a trio comprising guitarist, violinist and, naturally, a singer. The word ‘naturally’ is apt – her name is Karen Fairfax and she has chops. They’re a cover band, which is cool so long as you make it your own, and that’s exactly what they do. It takes a certain braveness to take on Son of a Preacher Man; who can outshine Dusty? Well, of course Karen didn’t, but neither was she in Springfield’s shadow. Were it the first time hearing the song, you’d swear it was theirs. Girl owns it.

Guitarist is from the States, got a sense of humour. ’40 years in the business have taught me to always play the landlord’s request… We’ve discovered we sing a lot of songs by dead people.’ He is Karl Weber, easy on the stage and a first class performer; you get the feeling he pulled this trio together. He’s got the business. An excellent musician; great singing voice and right at home with rhythm and lead – practically got his slippers on. Which bring us neatly to their occasional violinist, Rupert Lewis, a cap-wearing, inconspicuous looking bloke you wouldn’t give a second glance in the street (it’s always the way). The man is an entire rock orchestra bundled up in four strings. Spot on on rhythm, bang on the notes, and all over the feel. True to the original intent of the song as opposed to merely filling the gaps. This reviewer can’t remember having heard a violin playing rock and blues like it wasn’t an add on, a novelty. This was integral.

Take another little piece of my heart now baby, you know you’ve got it if it makes you feel good. Throat like cigar smoke and whiskey, Ms Joplin would have approved Karen whole-heartedly as the others gave The Holding Company a damned good run for their money. Straight into No Sunshine in deep tones evoking Nina Simone, belting out the chorus way up high and out there like Tina Turner when she was properly miserable. Dolly’s Jolene was perfectly expressed in intonations so tragic you just wanted to give her a hug. Stomping the beat-board, drumming my pain through her high heels, Karen rendered Fleetwood Mac’s Rhiannon like a wild thing. ‘Where are you going to go from that?’ countered an appropriately, highly appreciative crowd. My Brown Eyed Girl came the answer. Your man on guitar, Rupert, held that one on the vocals, likewise Creedence’s Bad Moon Rising: voice flowing like a river over rapids but perhaps not quite as tidal, not quite the howling moon as his female counterpart - but together this duo are something else.

It’s one thing to belt it out all husky and sexy but to hold it, to keep that intensity consistently, takes one hell of a diaphragm. Come Together was a tour de force! One violin, one guitar, a singer with a tambourine… Outrageous. Couldn’t go to the bar for the want of not missing a nuance – and nuances there were aplenty. Harmonies all over the place, the right places, that is, fine pickin’ and perfectly orchestrated.

Who knows where we’ll see Simple Chaos next but keep your eyes peeled. They’re based in Seaton, Devon, which might be a sneaky little hive of creativity given the evidence. This reviewer is still buzzing: how the heck do they hold Hotel California together with just a guitar and fiddle? They bloody-well did, alright. Knocked it right out of the park with the Stones Satisfaction for an encore and we all went home, well, satisfied. Well satisfied.