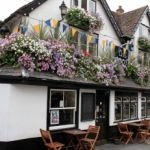 Next Sunday, Steely Dan are playing the O2. Last Sunday their highly accomplished tribute band Stanley Dee played The Boot in St Albans, a somewhat smaller venue. Even had the recently sadly departed Walter Becker been able to be in London this weekend, I doubt that London concert goers will experience a more joyous evening than was to be had in this ancient Hertfordshire pub.

Naturally, a small venue has its drawbacks, and as the layout of The Boot dictated essentially a line-abreast formation of the 11-member band, with no raised stage, it was impossible to see and appreciate them all. Having become a firm fan last year, this is the ninth venue I've seen them play and from this point of view I'd say my least favourite. There seemed to be one or two issues with the sound too, and I felt that microphone problems detracted from Paul's saxophone solo on FM, and Jen's lead vocal on Only A Fool, which was a pity. There was some unwanted feedback at times, and even Cavan was having difficulty making himself heard at one point.

These glitches apart, the vocal harmonies came across well and the playing was superb. With a lot of great tunes to choose from, no two Stanley gigs are identical, although they concentrate on the seven 1970s Dan albums with one or two additions from the "comeback" two and Donald Fagen's "solo" releases. There are about eight songs that you can depend upon hearing, and all are crowd-pleasers. Amongst these, Kid Charlemagne and Black Friday closed out the first half of the gig on a high.

After a short interval, during which I was able to improve my vantage point slightly, the music resumed with Dan's only instrumental, a version of Duke Ellington's East St. Louis Toodle-Oo. The second half show-cased various band members: Steve as usual taking the vocal lead (as well as playing trumpet) for Josie, Derek with the stand-out sax solo on Doctor Wu, then the perfect segue from Everyone's Gone To The Movies into Do It Again, which Amelia made her own with a fabulous vocal performance somewhat reminiscent of Tina Turner! Sadly I could see almost nothing of Mark, Keith and Don, though I'm sure the latter will have been drumming with his habitual broad grin, very much capturing the infectious joy the band shows for their music, as of course does lead vocalist and cavorter-in-chief Cavan, who must burn even more calories during the course of the evening.

Steely Dan (Becker & Fagen) were famously perfectionists, using numerous session musicians and many, many takes to achieve the sound on their albums. That is why it astonishes me to be able to witness a lead guitarist who is able to conjure the perfect sound, to my ear note-for-note, live, on every song. Take a bow, Darren Spicer - superb! Your right hand during Bodhisattva appears to move at the speed of a humming-bird's wing. I bet you won't be able to see that at the O2.

The set closed with my personal favourite My Old School and the aforementioned Bodhisattva, and after a brief pause, the "encore", Reelin' In The Years. Stanley Dee, you've reeled me in again - looking forward to the next time already!

Thanks very much Keith.

Stanley Dee @ The Half Moon, Putney 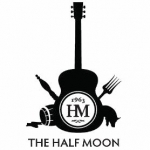 Stanley Dee Do It Again! The Half Moon, Putney on Monday 14 October 2013

Steely Dan tributes are not something you see every day. The music is so ambitiously challenging and complex, that to recreate the sound effectively takes many hands. But this is something Hertfordshire based tribute, Stanley Dee, appear to take in their stride.

If you are familiar with the Hertfordshire circuit you are sure to have come across them at the Horns in Watford or the Farmers Boy in St. Albans, where they are local favourites. Lead singer Cavan Daley also fronts another Watford stalwart, the Zimmerman. Wherever 'Stanley' go they are well received and certainly know how to have a good time.

But how would Stanley's fledgling gig out of Hertfordshire at the Half Moon Putney fair up against the notoriously intimidating and ruthless London audience ?

The crowd came in thick and fast to hear them and, although they were not packed in like sardines, they were more than appreciative and joined in the fun eventually. I am not certain what this London audience expected from these 'out-of-towners' and by their initial reception I'm not sure they knew what to expect either. It took them a few numbers to get into Cavan's animated performance and realise that what they were hearing were near note for note musical renditions of Steely's songs. About half way through the first set when the band performed an amazing version of "Rikki Don't Lose That Number" the audience realised they were in the presence of a very faithful, dynamic band with killer female vocal harmonies and an astounding brass section.

The varied set list comprised of favourites like "Haitian Divorce" and "Do It Again" along with some more unusual choices like "FM" and "With A Gun". The band manage to interact well with each other given the limited space and this playful interaction helps the audience to loosen up too. By the end of the set they were Stanley converts and helped end the night in a high with a version of "Reelin' In the Years" which in zeal and energy matched the original.

Given that they entered London as unknowns tonight, they left with another gig booked at the Half Moon, a captive audience and the beginning of a new London following.

Thanks very much Gerry for taking the time to write a review.

We did enjoy out first Putney gig and will be back at The Half Moon on Sunday 23rd March.

I went to this gig with a good friend who actually introduced me to Steely Dan way back in the 70's when we were apprentices - We have both been big fans of the band ever since and came to this gig open minded but a little skeptical that a tribute band could ever do the Dan justice. I really wasn't expecting too much, especially as it was free entry, but how pleasantly surprised we both were as the Stan performed a selection of great songs from the extensive back catalogue, even including some Donald Fagan solo material. We know the songs so well and knew when there was a distinctive and tricky solo coming up that would be difficult to replicate, but they did replicate amazingly well on every occasion. How did they managed to squeeze 10 band members onto that small stage and still pull off such a brilliant gig? How someone sets about successfully putting a convincing band like this together puzzles me, they are all clearly talented musicians and singers that are passionate about the Dan, and that really comes across in their performance. We had a great evening at the Horns watching Stanley Dee (what a clever anagram by the way), the only disapointment came when their set ended and they stopped playing! I was left wanting more, very impressed. I would have gladly paid to see this band perform, infact I felt slightly guilty that I hadn't. If you're a Steely Dan fan and are thinking about going to see Stanley Dee, just do it because you'll love them! Thanks for a great night, looking forward to seeing you again soon!

Stanley is very pleased you and your mate had a good time and enjoyed the music. Thanks very much for taking the time to write. See you soon.

The Horns, Watford on Thursday 3 January 2013

Great night at the horns going back 14th march

It was great to see y'all at The Boot last week. Great pub and great weather topped off by a great band. Everything's sounding better every time I see you guys! You may have created a groupie in me. Hope to catch you again soon,. PS: Have recommended you for a gig in Baldock - good luck! x

Thanks Howard. Very good of you to take the time and thanks for talking baldocks. x