Absolutely brilliant night a very very big night at STSC with the band on top of their game.

Vibrant band who had the crowd up from the get go 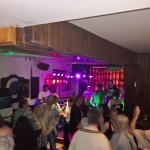 Wow! Thanks for an excellent summer evening of entertainment. What a band! I was completely blown away by your band 'Stillyano'. The sound was absolutely amazing! All band members played with so much passion and excellence. I loved every song choice. Playing hits from Queens of the Stone Age, Royal Blood, Lenny kravitz, U2, Bon Jovi and even a few of your own songs too, which are so well written and pumping tracks. Cheers for inviting me up for a tune...it was magic! Can't wait to watch another gig very soon. Definitely one of the best bands out there! ;0)

A quintessential line from the sci-fi classic, 'Blade Runner', delivered by an advanced bioengineered being, a replicant by the name of Roy Batty, to a bio-designer, J F Sebastian, as Roy strives to articulate the idea of the transmutation of hardware into something...well, alive.

And, in a sense, isn't that what musicians aspire to, as they reach for their instruments and search to create from them something real, which we can feel and respond to, and something which touches us?

Well, Ridley Scott's cinematic tour de force may not have been at the forefront of Stillyano's minds, as they took to the stage at the First & Last, but what they delivered over the next couple of hours was entirely in keeping with the concept which Scott's creation was endeavouring to communicate.

The equipment, stripped to the essentials for a rock trio of guitar, bass and drums, was utilised to massively powerful effect by Stilly, Seth Dunnett and Ian Kendray respectively and then sugar coated with Stilly's soaring lead vocal, to produce something, as Roy would have it, physical.

And something which proceeded to pull us in and make us...feel.

The set contained an element of original material. I know, when a band says something along the lines of, "And now we're going to play one of our own songs", it's often a signal for the audience to visit the bar or stand quietly for a few minutes, before applauding politely and waiting for the next well known cover version to arrive. I cannot emphasise enough, however, that that was absolutely not the situation here.

Stillyano's own material was first rate, carefully crafted and very impressive, with 'Automatic' and 'Adriane' particularly catching the ear.

The covers played were classics and included Billy Idol's 'White Wedding', Lenny Kravitz's 'Are You Gonna Go My Way?, Bryan Adams' 'Summer of '69' and Bon Jovi's 'Livin' On A Prayer'. Yes, these are tracks we've all heard murdered a million times before, but they were delivered here so expertly that such previous negative experiences were instantly excised from our memories. And how we celebrated that release...and how we danced in celebration!

My own personal highlight was a rock re-imagining of Adele's 'Set Fire To The Rain'. It was, frankly, heart stopping and brilliant...and has been racing through my mind ever since.

This was just a terrific gig from start to finish.

Now, I'm sure anyone who was ever going to watch 'Blade Runner' has done so by now, so I think I'm pretty safe in revealing that regrettably (at least from his point of view) Roy doesn't quite make the end of the film. The life span of a replicant is rather more limited than that he craves. A genuine desire though that, in contrast, Stillyano are around for a considerable time yet and continue to generate from that hardware of theirs something so...alive. Roy would approve.