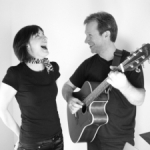 How great to see a duo who do not rely on amplification and backing tracks but still provide an evening of splendid entertainment.

Melanie Wall and Mac MacLaren rely on their own talents to make music and the result is that audiences come from far and wide to see them.

The small Garibaldi pub was packed to capacity for this much-anticipated concert by two musicians who obviously enjoy themselves performing as much as the audience enjoy listening.

Mel has a smooth-as-silk voice with a folksy feel about it while Mac is excellent on backing vocals and solo guitar accompaniment.

Patsy Cline's country classic Crazy followed but afterwards their choice of material constantly surprised and delighted me. Imelda May's "Kentish Town Waltz", Joan Osborne's haunting "One Of Us" and Maria McKee's "I'm Gonna Sooth You" are rarely heard at pub gigs -- but they suited this duo.

The only irritating aspect during the first half was that some of the punters were so loud that they almost managed to drown out the music, so gentle and subtle was Mel and Mac's performance.

Mel did a great version of Aztec Camera's "Somewhere In My Heart" in the second half and the regulars really appreciated her interpretation of Adele's recent smash "Rolling In The Deep".

But then there were more surprises. Mel put on her best Cockney voice and the pair performed Blur's novelty hit "Parklife". It worked brilliantly. Even more unlikely was their choice of the Scissor Sisters composition "Take Your Mama" and that proved to be highly original too.

MacLaren Wall presented also George Michael's "Faith", Imelda May' s "Inside Out", Lily Allen's "It's Not Fair", Kylie's "Can't Get You Out Of My Head" and, probably their most ambitious choice -- 10CC's highly complex "I'm Not In Love", performed with just two voices and one guitar.

Congratulations to Mel and Mac for providing two sets of imaginative and highly enjoyable music.

Thanks Colin for such a kind and detailed review! We do love playing and singing these songs and we're appreciative that some of the more "unusual" numbers went down well - we are always on the lookout for new songs to add to our eclectic set. Not everything converts well to acoustic, so progress at the rate of 1 or 2 new songs per set is what we aim for.

One of the downsides of getting so many people into a small space is that the temptation to chat becomes unbearable! However, the main culprit from Sunday has been identified and his bandages tightened!

Write a gig review for The Garibaldi »
Share this page