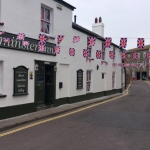 Really enjoyed hearing you play tonight guys, you were excellent!!

(Saturday 21st april 2012) My wife Jill and i and our two friends Bernie and Sandra caught the gig at the Crown inn at Bridport last Saturday night. We loved the music from " Wishing well through to " Whole lotta Rosie " and just about everything inbetween. Fine musicians playing great rock music, thanks for a brilliant night lads. What a pity the pub bands in Tewkesbury where we live are not more like you !. Thanks again and best wishes for your future, hope you make it to a wider audience soon. - Rob Fitz

Thank you so much for your kind words Rob, sounds like you enjoyed the night as much as we did! Hopefully see you around again soon...if you ever want us to come play for you in Tewkesbury then let us know!! Cheers, Adam

This was the first time i'd seen the Perfect Strangers and I still cannot believe they are only a 3 piece. The sound they give off is amazing and there is certainly no room for more in the songs they perform. They have chosen a fantastic set list and have not gone for the obvious choices when looking at a bands discography to choose their sets. Adam on lead vocals and Guitar makes everything seem effortless and his solos are far from predictable. Dave on drums suprised me with just how busy his playing is. Although he was playing a smaller kit than normal I would beg him to make this the norm as it's been a while since I have seen and heard a drummer so enthusiastic about his role in every song. Then there is Simon, One of the most entertaining Bassists I have ever seen! He manages to fulfill his Bass lines plus somehow make up for there not being a rythm guitar all at the same time. He makes his 5 string Bass sing like he's invented a new way to play! Congrats guys!

Thank you Steve, was great to meet you and thanks for making the effort to come and see us. So glad you liked the songs, and the way we played 'em!! Hope to see you again soon.

The only downside to a Perfect Strangers gig is that people keep approaching you and saying how good they are - when all you want to do is listen because, well ... They are SOOOOO GOOD!

And the reason they're so good - well, because each band member is a truly talented musician! Simon Garrett on bass provides great support and Dave Sandercock on drums is tremendous, but it has to be said that lead singer/guitarist, Adam Sweet, just knocks you cold. He's been playing the circuits since he was 15 and I would be truly amazed if he does not achieve country-wide fame in a year or so if that is what he goes for.

The band opened with Aerosmith's "Sweet Emotion" and as their talent flowed we were treated to rock favourites such as Fleetwood Mac's "Oh Well", Thin Lizzy's "Rosalie", Deep Purple's "Smoke On The Water" and many, many more, each with guitar solos which, I swear, matched or even surpassed that of the original!

One of the ending numbers was Tom Petty's "Running Down A Dream" and it had the locals rocking in the aisles! Admittedly there's not an abundance of aisles at the Inn, but believe me, people were rockin'!

This is a band that could go places. If you spot them at a local venue, go and see them! You'll be swept away and then perhaps you'll realise that we were not exaggerating! In fact we've had to ensure they appear here again so look out for a repeat performance in mid-November. My advice -don't miss it!

Thanks for taking to the time to write such a fab review Pete, really appreciate it. We had a great night in Yarcombe, we'll see you again in November! Adam 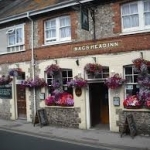 I last reviewed The Perfect Strangers in August, when I first saw them, shortly after the band had newly formed. Since then my wife and have become firm fans, having seen them on a number of occasions at various venues and it was good to see the Nags Head gaving them a great welcome on Saturday.

The band have expanded their set with a few great additions to the list and their version of Led Zep's 'Kashmir' is a corker and well worth hearing.

It is a testament to the band's musicianship that they sound tighter at every gig. It took only a very brief soundcheck to get the balance completely perfect.

New drummer Dave (a long term stand in for Ben, who is taking a break) has settled in well after a few months and is technically very capable, performing some great fills and quite an exciting impromptu solo right at the end of the gig. I would love to hear him and bassman, Simon, flexing their musical muscles on something that would give them both some scope to show off - perhaps 'Radar Love' might be fun?

Bass players are often considered the quiet men of the band, staying in the background and in the shadow of the lead guitarist, but Simon is no introvert and delivered some quite intricate bass work throughout. I particularly enjoyed the lovely bass chords employed during 'Fire and Water'.

As ever, Adam's lead guitar work was outstanding and he delivered some truly superb solos. The Nags Head is his local and it seemed the local crowd inspired him to really pull out the stops. Recognising that they had the crowd well and truly behind them, they didn't stop for a break, but kept going for a solid two and a half hours, with several encores for the enthusiastic crowd!

Well known crowd-pleasers by bands such as AC/DC, Fleetwood Mac, Hendrix, Queen and Led Zeppelin were mixed with quite a few lesser known songs - a brave move, but one the band are quite capable of pulling off. Doyle Bramhall II is hardly a household name and his song 'Green Light Girl' was not a massive hit compared to the other songs in the set (and certainly not a typical pub jukebox standard) yet the band regularly use it as their opening number. Similarly, ask most people to name a Lynyrd Skynyrd song and there are probably a couple of other songs that will spring to mind before 'Simple Man', yet the band approach and perform these classics with as much fire, emotion and passion as all the rest.

In summary, unlike some of the many classic rock and blues bands that are doing the pub circuit in this area, this band are worth seeing time and time again because they just keep getting better and better.

Thanks for such a brilliant (and detailed) review!! We had a great time at The Nags last Saturday, thankyou so much for all your support. Look forward to seeing you at another gig soon!