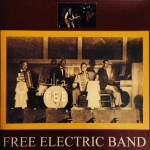 What a great gig at the 3 Wishes. This is the best band band on the circuit, with great musicans. All playing in harmony of each other. Unbelievable music of the 50, 60, anfd 70,s.

Played from the heart and respect for the songs and for that era. Excellent musicans.

Thanks band , whetre your music always uplifts me and makes me feel good.

Thanks alot for Keeping Rock and Roll, a live. Aidan.

Thank you, Aidan. We hope to see you again at one of our forthcoming gigs! 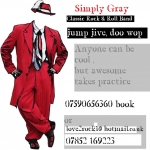 Brian Smith Simply Gray continue to improve with every outing. Sax and keys both more confident now as they get more familiar with the rep. Competent guitar line-up supported by a very well synced rhythm section with Paul (on bass) and Simon (depping on percussion).

Simply Gray's vocals also continue to improve as the singers come to rely on and trust their voices more and more. Their delivery of a tight, no time wasted, relatively up tempo set list keeps things moving along. The ballads they do offer are well executed and serve to mix things up very nicely.

Surprised to see so many young people there last night, all clearly enjoying what they were hearing. (How do they know this stuff?) We'll all have our favourites from the era covered - mostly late 50s and early 60s - and songs we can't bear. (I've no time for Bill Haiey or up tempo boom chick stuff) but Simply Gray make it all very enjoyable. Their progress is clear to hear. Things can only get better. Their USP is music is to tap your foot too. Book them if you get the chance,

Youngsters starting out in the music business would do well to listen to these 'craftsmen' at work as they don their red braces to rock the joint.

With a combined age approaching 1000 (just joking) they were a hit with the Three Wishes' pubgoers of all ages as they kicked off the first set with Chuck Berry's You Never Can Tell before main lead singer Kenny Holbrook (wearing red suede shoes) announced: "Hi, I'm Johnny Cash" and they tore into Folsom Prison Blues.

The musicianship is impressive from the six players who provide lead, rhythm and bass guitars, keyboards, sax and drums -- and all the leading rock 'n roll protagonists were given a hearing during the band's two sets.

There were several Elvis tracks on offer including a memorable version of his early classic Blue Suede Shoes (the sax solo by Steve Salkind giving the number added oomph). Eddie Cochran (one of Kenny's favourite singers and guitarists) was well represented too and the Grays performed the much under-rated Something Else.

There was plenty of Chuck Berry material on offer too and they included Sweet Little Sixteen and Carol. Lead guitarist Laurence Bird takes on some of the vocal work and he was excellent on Frankie Ford's driving rocker Sea Cruise and Elvis's That's Alright Mama.

Simply Gray have an extra special ingredient. They are highly competent at playing the kind of jump jive music that was so popular in the 1940's and 1950's. It wasn't a surprise to see dancers jiving to classics like Louis Jordan's 1946 hit Choo Choo Cha'Boogie; Louis Prima's Jump Jive And Wail and Big Joe Turner's Flip Flop And Fly.

Completing the band's line-up are the rhythm section of Frankie Bass (on bass guitar,no less) and the highly talented Nick Spevock on drums.

Simply Gray (shouldn't it be 'grey') provide a great night of rock 'n roll and swing and jive music. So find your best drainpipe trousers and pencil skirts and check out this rocking outfit.

SIMPLY GRAY put in a very good performance at The Three Wishes, Edgware last night. We had great fun. Great musicians! So good we played songs that were not rehearsed which sounded bloody brilliant. This was our first indoor gig, all the others have been Street and Town Festivals. We are already booked for three more open air Festivals.

Amazing outfit! Be-Bop and Jump-Jive is very popular with audiences.And a repeat at The 3 wishes Edgeware 29.9.2018. 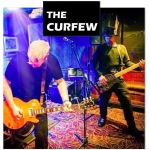 Amazing The Curfew on Saturday 28 April 2018

Hi, I came last night with some friends and it was the first time we had seen you guys. What an amazing and brilliant night we had. We had heard the band were good, but didn't expect 'that' good'... such a lively performance and full of energy and a great show and very entertaining. A really truly outstanding band and a great and fun night out. I look forward to coming along to see you again. Vanessa

Many thanks Vanessa - Seen you since!!