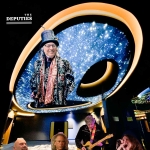 band as good as ever, plus v good extra harp/vocals chap for some numbers; nice to see a bunch of rare top quality guitars in use; as well as various reasonably-priced beer and a busy quality bar made this a good night.

This band is very competent with a good sound and spread of material. The only negative is the gig ended at 11.05pm, far too early given the later drinks licence,the entertainment provided, and its Saturday night situation cf ONeills Sutton and Kingston town centres1am music. David Jackson