Just want to say how much everybody loved your show tonight. We may be a small venue but thoroughly enjoyed tonight. Your energy ceases to amaze us and everyone was dancing n singing. Can’t wait for next visit on 31 March everyone welcome at the Waggon

Aww....Thanks So Much!! ... And We Also had A Brilliant time too!.. Its Just Great to see Everyone Enjoing themselves and Thats What We're All about !!!

Looking forward to seeing you in March!... Till then... 'KEEP THE MUSIC LIVE' !! Tiny Tina Peace n Love 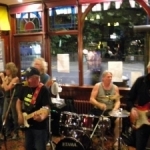 I had planned to review Tiny Tina's Rock & Blues Band's show some time ago after receiving rave reviews from other musicians.

And I finally got to see their power-packed act at the Three Wishes in Edgware, the very place where it all began from this bubbly bundle of energy.

Miri McKaddas, aka Tiny Tina, loves performing and this comes across in her lively, exuberant performance and she bonds quickly with her audience.

Her personality is infectious and her voice rasping and raunchy. Miri is fast to point out that this is not simply Tina Turner tribute act.

And she demonstrated this clearly in the first half by performing a wide range of rock, soul and blues numbers made by artists other than Ms Turner.

But the songs are well chosen and fit Miri's voice to perfecton. So at the Three Wishes there was the Janis Joplin/Erma Franklin soaring soul classic Piece Of My Heart alongside great blues songs such as B B King's pounding Rock Me Baby and Screaming Jay Hawkins' uplifting I Put A Spell On You.

The first set ended with one of Tina Turner's 1990 classics , the raunchy Sticky Fingers.

Miri, in glittery dress, turns into a driving, dynamic version of Tina Turner in the second half as she pumps out hit after hit, starting with River Deep Mountain High, the booming 1966 hit Tina made with ex-husband Ike.

The hits follow in quick succession -- the rocky Addicted To Love, the sultry Private Dancer and a marathon version of John Fogerty's Proud Mary, which brought the Wishes punters to their feet.

Throughout Tiny Tina is supported by a simply splendid soulful band of superb musicians. These guys are top professionals and add greatly to the overall enjoyment of the evening.

Dave Lathwell (lead guitar) has played with Paul Young and Q-Tips; John Slade (bass guitar) was with the Nighthawks; Gez Khan (keyboards) is currently also a member of a top Santana tribute band. while they were joined at the Three Wishes by Belgian drummer Maya.

The band performed also in the second set Chris Farlowe's Out Of Time and James Brown's I Got You (I Feel Good). I had no problem with that except that I would suggest that the show could be better structured.

I feel Tiny Tina's Rock & Blues Band should perform a full one hour set of Ms Turner's hits (let's face it, there are plenty to choose from) leaving the first half for the other blues, rock and soul numbers. Perhaps the end of the first set could include a couple of Tina's minor hits to whet the audience's appetite for what is to come.

The Three Wishes show ended with Ms Turner's classic smash The Best which the punters absolutely loved. It's probably one of the best ever singalong numbers.

The Tiny Tina band are one of the best acts on the pub and club circuit and they are worthy of performing to much bigger audiences at theatres. Don't miss them.

Thankyou So Much Colin!

I really appreciate that you took time to come and see us.. So glad you enjoyed the night!!

We definitely welcome any helpful criticism and take on board any suggestions that can improve our performance!..

After all It's All About Entertainment...And Having Fun!

Over forty members and friends of CLAN social club packed into the upstairs function room at the Forester, West Ealing to hear the Tiny Tina Rock and Blues Band on Saturday 30th January 2016. They were certainly not disappointed. From the moment Tiny Tina took to the microphone, the audience were up on their feet dancing. It was a fabulous performance of entertainment and music for dancing and tapping your feet, only split up and stopped by the raffle. Tina was great on lead vocals but her band members must also be congratulated on a superb performance behind her. The band members were Dave on US Fender lead guitar, John on Fender bass, Sparky on keyboards and Colin on drums. Great songs included Nutbush City Limits, What's Love got to do with it, Simply the Best as well as an odd Beatles and Neil Diamond number. But on this performance they were "Simply the Best" band CLAN could have booked.

Thankyou Michael for your Lovely Comments!!.. We Really Appreciate it!!

....What a Fantastic Audience!!.. The Energy was definitely Flowing! 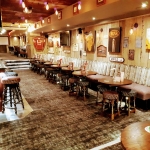 Thanks everyone for a fab performance at The Three Wishes...was wiped out by the sheer talent from every band member. I don't live in London , but wished I did. I'm from Glasgow. visiting family etc... Tina & Pip are both Godeses..both vocalist/singers/backing/front line. Pip is so chilled n sultry cool as on keys...whilst Miri is a stunning vocalist and mover! best Tina band ever I've saw and heard. AND they look fab also, Guitar Bass n Drummer are so PRO it's unreal.!! These girls and band ROCK!! 100% Everyone must check out this amazing band asap. Jono Rezzillo Glasgow The Three Wishes

Wow thank you sooooooo much!!! So glad you enjoyed it! We did too!!!!!

Heads Turned for the Pocket Rocket The Three Wishes, Harrow on Saturday 9 November 2013

I hadn't seen the band for several months so I was more than a little interested in how they had polished their act. I wasn't disappointed with the effort put in by Miri, Pip and the guys.

The comfortable venue, long and thin in design, was packed out with people enjoying a catch up on a Saturday evening. A crowd of 90/100 people created quite a din. It was busy, with a friendly atmosphere throughout the venue.

The clock struck start time and Miri, looking absolutely fabulous, launched into Tina Turner's "Simply The Best". There was a noticeable drop in the volume of talking around the top part of the bar (the pub being split over two levels) as heads turned and that was that - total captivation!

The Stones' "Honky Tonk Woman" came next with many singing along to the chorus followed by a bluesy "Sin City," which, although not my type of music, was well covered, while a Bob Dylan number showed off the earthy, razor-blades-eaten-for-breakfast vocals of Miri at their best.

One advantage this band has over many others is that Pip assumes lead vocals from time to time, which he did in a decent cover of "Be My Baby" keeping things fresh for the audience as well as providing a welcomed opportunity for Pip to relieve himself from keyboard duties.

Not to be outdone, it was then the turn of guitarist Dave who played to his strengths during a blues number showing off his talents in his usual professional way, which was hard not to appreciate even if blues ain't me!

Half-time went quickly and several Tina Turner classics later the crowd could tell that they had seen something gratifying which added to their own Saturday night out.

I left my own high stool a happy man. Here's to the next time.