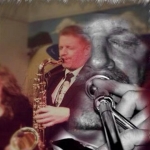 Local legends The Communicators blew the roof off the Tropicana on Friday night.

The Comms first gig in six years got off to a slow start with the only support on the night, a DJ set from Ska Train which filled a void while the crowd slowly filtered in.

But come 9.30 and The Comms burst onto the stage opening with The Communicator, a Madness track the band have certainly made their own.

Clearly loving every second of their time on stage, The Comms joked their way through an evening of new tunes and classic covers, with frontman Mitch an engaging and often hilarious bandleader, like the love child of Suggs and Eddie Hitler, at one point even pinching a pint kindly donated by a fan near the front.

The Comms’ roots as a cover band were clearly on display as they romped their way through pitch perfect renditions of ska standards Lip up Fatty, Pressure Drop, and A Message To You Rudy.

These were made all the more impressive by their rich sound courtesy of their superb horn section.

They also brought a little magic with under-rated Madness classic The Wizard, and a version of Monkey Man which was more Reel Big Fish than The Specials.

The Comms really came into own when playing their own tunes and it’s clear this is an act which wears its influences on its sleeve.

From the Suggs-esque introspection of Bristol (Is My Home), to the anarchic Banging On The Wall, and their fantastic reworking of the Skatalites The Guns of Navarone (Living In A Ghost Town), the Comms display a level of cheeky fun which could see them easily placed among some of the best British ska and two tone acts of the last 40 years.

But it was tracks like BOB (Bit Of Both) from their upcoming sophomore album Frankie Howerd's Slippers showed the promise of the bands future.

The Comms manages to combine the old with the new in a way which feels fresh and unique - mixing the likes of Madness and the Specials with speedier sounds, driving choruses, and guitar shredding solos from Californian imports like Less Than Jake and Reel Big Fish is a risky move, but something The Comms pulled off with ease, and the result is phenomenal.

Ending the night with an emotional thank you to all their fans the Comms promised this was only the beginning, before ending with one final cover - Night Boat To Cairo.

Exciting, unique and entertaining to the last, here’s hoping The Communicators comeback is the start of big things for the band from Burnham-on-Sea.

Review from the Weston Mercury. Many thanks.