A great night was had at The Old Bell yesterday. I had not seen these guys before and was very impressed. Great to see a real double bass in the grand tradition, makes a lot of difference to this style of music. The band was very tight, wonderful lead guitar (bit surprised that it was a Fender most of the time, but expertly played), good drumming and vocals together with a lot of rarely heard material which was very welcome. An all round very polished, professional and highly enjoyable performance. Anecdotes between songs added to the atmosphere too.

Highly recommended - you won't find many bands as good as these guys!

This was a new venue for us, so it was really great to see you all enjoying yourselves so much.

I suspect that I was talking to you at the bar at the end of the night, if so it was nice to meet you. I must say you were all very friendly and you made us feel very welcome. 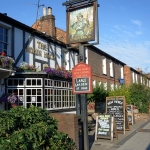 What a night! We were just passing The Robin Hood on my way to the Horn, when we saw what looked like stage lights through the window, so we decided to pop in for a quick drink and see what was happening. The first thing that struck me was the crowd (we had to fight our way to the bar). The second thing was that in this small pub there was a four piece band with full stage lighting, sharp matching outfits and what appeared to be a fifties microphone with blue lights in it!

They were playing rockabilly and although I didn't recognize many of the songs, I found myself instantly caught up in the music.

In between songs the front man told some funny anecdotes about various famous icons such as Elvis and Buddy Holly that he had helped and influenced. I think he may have been stretching the truth a bit because he really didn't look old enough. One unusual thing I noticed was that whenever the singer started telling his stories the audience hushed and actually listened.

The band seemed to be to having a lot of fun and it must have been infectious judging from all the smiling faces in the audience.

I'd never heard of the band before, but they really were tight and although I've never really been a rockabilly fan I really enjoyed the music and I'll certainly be looking out for them again.

We never did make it to the Horn.