The Zimmermen were totally true to their claim of being able to present an evening of 'Bob Dylan with Knobs on'. They presented as a disorganised group of musicians due to the small space available but the moment the mic was switched on they showed how much practice and dedication had gone into the evening and the audience then became totally entranced by the 6 guys set out before them.

The Zimmermen are not only an extremely talented bunch of musicians, but the love they have for the music they play was was more than a tribute to Dylan. Kevin, the lead singer, does not attempt to copy Dylan's voice, but sings in his own wonderful style the collection of all Dylan's music.

The enthusiasm and devotion the band displayed for all things Dylan was truly covered in their playing some of the well known tracks, such as "Mr Tambourine Man" and "Blowing in the Wind" as well as some of the more infrequently heard songs. All were played from the heart and the audience participation was astounding because their attention had been held captive from start to finish (which was well beyond the agreed time due to everyone's enthusiasm!)

It just leaves me to say a very big thank you to The Zimmermen for making a very icy cold January evening into one of the most entertaining any venue could have wished for. Hats off to an outstandingly talented and enthusiastic band that deserve not only to be fully booked for a long time but to have great recognition for their collective talents.

Sunday 15 January 2012
Reply from The Zimmermen:

Thanks very much Tina for taking the time to write such a lovely review.

'a disorganised group of musicians'.. just about sums it up!

The Zimmermen @ The Chequers, Streatley 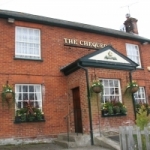 Surprised and Pleased The Chequers, Streatley on Saturday 4 June 2011

Having gone to The Chequers to see 'John Verity', I was surprised to find that the Zimmermen were on instead. I have to say that I've never enjoyed Dylan music so much!

The band were really in tune with the audience throughout and kept the attention of all. They were really tight right from the start. This was mostly down to singer, Cavan, who has an incredible amount of energy and really never stopped moving and smiling for the whole two hours that they played. Shane on the acoustic guitar also contributed a great charisma to the gig helped along with his witty comments.

It was good to see ('Two Guitars'), Dave Williams and drummer, Steve Laffey, there, as I know both from other bands who play The Chequers from time to time. Dave was great throughout, but is a particular ace on the slide, whilst Steve is a good solid percussionist giving the front men a great deal of confidence in his abilities. Rather hidden at the back, the bass man in black did a superb job with holding the whole band together.

Please do Streatley again soon guys - you were great!

Sunday 5 June 2011
Reply from The Zimmermen:

Thanks for that Tim. I hope we will get back to Streatley soon. Cavan

The Zimmermen @ The Horns, Watford

The Zimmermen are guaranteed to get the crowd going and they certainly did that last Sunday. The singer never disappoints and rarely forgets the lyrics to the most complex Dylan songs - he's great and always smiles throughout. The bass and lead guitar were exceptionally good, as were Shane and Spike who are always entertaining - whatever the occasion.

If you haven't seen them yet, let the Zimmermen unlock the doors to the dark corridors of your mind, where all those forgotten Dylan songs have laid dormant for years.

Simply splendid stuff. Good on you lads! You never fail to cheer me up.

Loved It The Horns, Watford on Sunday 20 September 2009

I was visiting from Seattle, Washington in the USA and my friend took me to see The Zimmermen. It was so much fun, and we loved their energy and personalities and the wonderful song selection. I especially liked how the audience joined in singing, and it was very moving at times, even. I have never seen people having such a good time all together like that, and it did not feel like a room full of strangers.

My favorite songs were Wheel's on Fire and Durango.

I liked the atmosphere in The Horns, and the staff did a great job in the crowded environment. Everyone was very friendly and accommodating. Seeing The Zimmermen at The Horns was one of the best parts of my UK vacation. Thanks!